On the 18th October 2017 Jeff Seder will present at the inaugural HorseTech Conference on “New racehorse selection technologies: the good, the bad and the ugly”. Don’t miss it by registering for the free livestream here.

Evidence of the quality of EQB’s data insights can be found in the work they’ve done over the years for owner Ahmet Zagat. The New York Times reported that Zagat had entered American Pharaoh, then an unraced yearling, for the sales and that Seder advised the owner “sell your house before you sell this horse.” The horse was bought back at auction by the owner for $300k.

American Pharoah has since become the first horse ever to complete the Grand Slam of American horse racing, winning the Breeders Cup and The Triple Crown, while setting a new $8.3M single season race earnings record.

Zayat has emerged in recent years as one of the leading owners in horse racing.

In addition to American Pharaoh, Seder’s research is behind the careers of dozens of stakes winners, including Forever Together, Bobby’s Kitten and Madcap Escapade.

After years of research, Seder has identified that heart, lung and gait analysis are critical when choosing a horse with the intention of it being successful on the track. Seder’s career is proof that the work of a bloodstock agent can be transformed through the se of sensor technology and data. Long before we all carried smartphones and before personal computers were even invented, Seder was innovating with horse technology.

Seder’s fascination for horses was discovered when his girlfriend took him to visit some stables during time out from his studies of business and law at Harvard. Keen to make an impression he ended up writing his thesis on the racing statues of Massachusetts. Clearly his attempt to impress the young lady also impressed his tutors as it got him an A grade.

Shortly after graduating from Harvard, a sports medicine research programme was set up in America and a young Jeff Seder was part of the research team. Using slowmotion cameras to analyse and compare athletes to see what made one person better than another, Americans started winning medals.

Seder’s eureka moment for founding EQB came when he realised that the research being done as part of the sports medicine research programme could be adapted to horses. This research would provide Seder with the opportunity to look for data where no one else was looking.

Seder is a pioneer who has proved that a data/science approach to thoroughbred racing is not only viable but is now a key determinant of success. He has spent his life finding ways to identify the characteristics that will give a horse an edge in a race, but it’s as much an art as a scientific discipline.

Value is created from using data to do more than just identify the fastest horse or the horse with the staying power.

By bringing together a range of data sources that are continually being added to with advances in technology, it is possible to decipher the best way to train an individual horse and to ascertain which races are best suited to that horse, thus having the greatest possible chance at success.

In the early days, the teams behind advanced elite human athlete efforts were making great use of electrocardiogram (ECG) technology but Seder found it all but straightforward reapplying this technology.

He worked with Hitachi to develop a custom device for horses because the machines designed for use with humans weren’t reliable enough. The horse’s heart rhythm would sometimes be double counted by machines designed for the human market and artefacts were a major issue because a horse’s skin has a fast twitch reflex that’s used to respond to a fly landing and this could easily render the data gathered by the sensitive sensors useless.

Similar issues arose with Ultrasound, so Jeff painstakingly had to reverse engineer a customised ultrasound machine before he could begin to get value from the imaging technology.

The availability of expensive high-speed cameras capable of recording hundreds of frames per second opened up the potential to analyse gait in ways that were previously unimaginable. Inefficient stride patterns require substantially more energy and add stress to the joints that impair performance and can lead to injuries.

The identification of horses with natural efficient strides provides clear buying advantages and similarly being able to identify horses that are more extravagant can help with training and selling decisions.

To collect the reliable datasets required, Seder had to develop some unique skills for data capture, as you can imagine, given how challenging it can be to get consistent readings from excitable young horses. To get to where he is today, capable of making high quality reliable insights, has taken a lifetime of work and an investment of about $7m in building the company’s proprietary database and the tools to use it.

With accurate new sensor technology coming to market, the ability to collect quality data continuously is becoming easier but it’s increasingly important to be able to capture and understand the data in context.

To illustrate this point, think about the 10,000 digital ultrasound images of horse hearts that Jeff has collected. Yes, it would really help you begin to understand what an average thoroughbred heart looks like and to get a sense of the variability in horses, but the potential value of this data increases exponentially when these images are all tagged together with the age, sex, breeding and winning information.

It’s the analysis of these large data sets that allows us to build models that enable us to predict accurately the contribution that a particular imaged heart is making to a two-year-old that we might be planning to purchase.

However, as Seder says himself: “The are still many unknowns and maybe unknowables in the racing game. The best trainer with the best technology and the best two-year-old with the genes and physiology to win and the outcome is still in no way guaranteed. The psychology of the horse, the skill of the jockey and their will to win, not to mention a bit of luck, are all critical factors, but we can use technology to shorten the odds.

“A winning racehorse is a symphony. There’s lots of ways of writing a symphony by combining the different parts, but on their own each is just a noise.”

Jeff Seder will be giving a keynote presentation at the inaugural Horse Technology Conference being held on the 18th October at the Royal Veterinary College in London.

Some interesting insights from this episode: 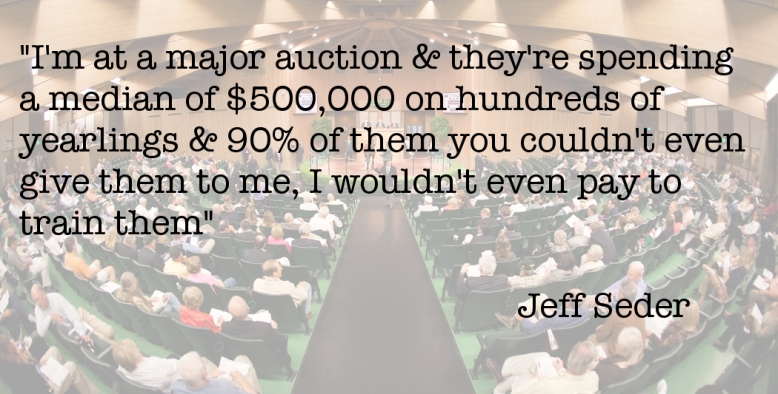 Make sure you don’t miss Jeff’s presentation by registering here for the free livestream on the 18th October 2017.

The HorseTech Conferences are an international series of Conferences designed to profile the world's leading uses of tech in the equestrian world. Replay the video recordings of all the keynote presentations from previous conferences, download the completely free Global HorseTech Market Report and register to attend future conferences or to join us via the free livestreams on our contact us page.

The ultimate goal of the conference is to generate greater awareness of the fact that equestrians have innovated to develop and provide the highest standards of animal welfare in the world. We hope that through the conference we will help more people appreciate the value of our relationship with the horse and the unique neurological adaptations of the equestrian.